Let's face it: when it comes to paternal instincts in the animal kingdom, many fathers practice the "hit-and-run" mating ritual. A majority of fathers are programmed to produce as many offspring with as many partners as possible and they usually don't stick around to raise their offspring. However, there are many exceptions to this theme that dominates the animal parenting scene. In some species, the father plays an important role in raising the young along with the mother, or sometimes, in place of the mother. Here, we can find some animal daddies that prove to be an exception to the prevalent "father non grata" theme in the animal kingdom.

Top 10 Fathers in the Animal Kingdom

1. Emperor Penguin - A Personal Sacrifice for the Good of His Young 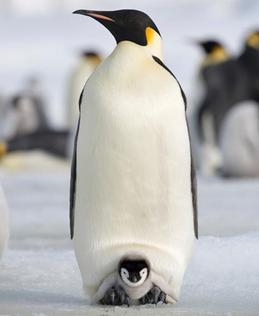 Image via AtlasImages/iStockphoto
The emperor penguin serves as one of the few examples in nature of a dedicated father. After the mother lays the egg, her nutrition levels are diminished and she must replenish them by feeding in the ocean for two months. The mother's absence leaves the father responsible for keeping the egg warm through the freezing Antarctic weather.

While the mother is gone, the father spends two months holding the egg cautiously between the tops of his feet and his brooding pouch. During these two months, the father starves himself to prevent anything from happening to the egg. If the egg becomes exposed to the harsh temperatures or the father moves suddenly, the chick will perish. Therefore, the father's sacrifice, dedication and balance ultimately ensures the survival of the chicks. What a dad!

2. Rhea - Considered a Player but Actually a Single Dad 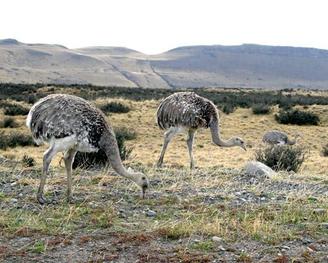 Image via Jeremy Vandel/Wikimedia Commons
Much like the emperor penguin, the rhea is a large, flightless bird where the male incubates the female’s eggs until they hatch. Male rheas incubate 10-60 eggs for six weeks, with the average nest containing 26 eggs. However, rheas differ from emperor penguins because male rheas are polygamists. Despite their wandering eye and multiple mates, male rheas aren't at all deadbeat dads.

Aside from incubating the eggs, the daddy rhea is also responsible for nest-building and raising the chicks for the first six months without any assistance from the mother. If anything threatening — even a female rhea — approaches the daddy’s precious little ones, he will not hesitate to charge. The father raises the chicks completely on his own and teaches them necessary survival skills.

3. Jacana - Raising Kids Not Certain to Be His 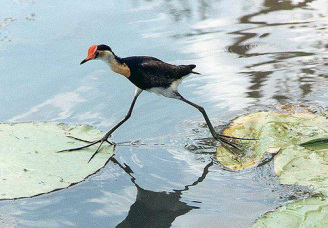 Image via Ted Hill/Wikimedia Commons
Like the rheas, jacanas are very active fathers who not only incubate their nests but teach their babies about the basics of life. Male jacanas do all the hard work by making the nests, and protecting and incubating the eggs while the female jacanas find more mates. If the eggs become endangered, the dad carries them to a new nesting site under his wing. Once the chicks are born, the father helps feed and care for them until they can survive on their own. The female only returns if the something happens to the eggs.

Jacana fathers are excellent examples of loyal homemakers, for they even choose to stay with the nest long after the females leave for migration. They also care for eggs that were fertilized by other males. Talk about a loyal dad! 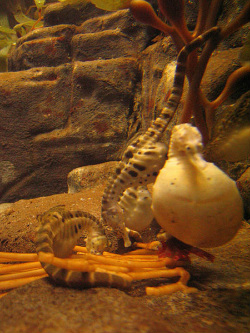 Image via Jaro Nemcok/©nemcok.sk
Seahorses are among the most unique animals in the world because they belong to a fish family known for an oddity: male pregnancy. Yes, it is the male seahorse who gets pregnant and gives birth to the young.

Male seahorses possess a brood pouch where females deposit their eggs. Once the eggs are deposited, the male fertilizes the eggs and incubates them for a period up to 45 days, until they emerge as fully developed little seahorses. Another interesting aspect of seahorse reproduction is that the fathers even experience muscular contractions as they give birth.

As shown in the image, male seahorses get quite large during the pregnancy period. The number of babies may vary greatly by species, as seahorses can deliver as few as 5 babies or as many as 1,500. On average though, they deliver around 100-200 babies .

5. Wolf - Faithful to His Family Type of Daddy 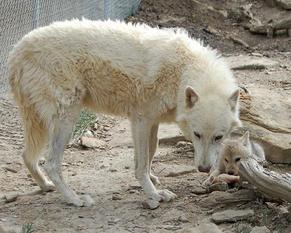 Image via Kamia the Wolf/Flickr
Wolf daddies prove to be excellent fathers for they are attentive, monogamous and fiercely protective dads that live with their she-wolves for life. A wolf pack is a classic example of a nuclear family consisting of a mom, dad and kids.

After a female wolf gives birth, she stays close to her helpless pups and never leaves her den for several weeks. The male wolf protects the den from predators and hunts for food to share with his new family. Let's just say the dad never skimps when it comes to sharing edibles with his pups. Whereas a female wolf will regurgitate meat to feed the pups, the dad will provide entire pieces of fresh meat. As the young pups grow, the dad takes on the role of stern, sometimes playful mentor helping integrate the pup into the pack.

6. Water Bug - Carrier and Protector of a Bug's Life 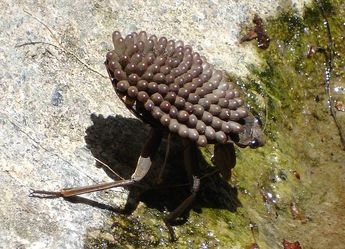 Image via Giant Water Bug/Wikimedia Commons
Insects aren’t generally considered one the most active parents in the animal kingdom, but male giant water bugs are an exception. Giant water bugs display the most dedicated paternal care in the insect world by carrying the eggs on their back until they hatch. Water bug dads carry the entire brood of eggs for three weeks, often up to 150 eggs at a time. While carrying the eggs, the father makes sure to protect them and dry them out of the water so they don’t get moldy.

You want to avoid interfering with water bug fathers at all costs because they can deliver one of the most painful bites among all insects. For these dads, it's all about protecting themselves and their eggs.

7. Frog and Toad - A Whole New Meaning for Holding the Babies 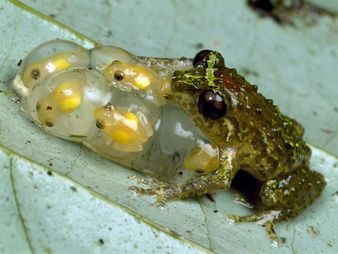 Image via George Grall/National Geographic Magazine
Perhaps no group species of within the animal kingdom contains so many dedicated fathers as frogs and toads. Some frog fathers, shown in this image, carry their young or tadpoles in their mouths to protect them from predators such as insects.  Often times, the fathers refuse to eat until the tadpoles are old enough to survive on their own.

In some types of frogs, the tadpoles are embedded inside the the frog father's skin, or often on their backs or legs (such as the midwife toad). One frog species, called the pouched frog, has males that carry their young within a specialized pouch while they mature. Who knew amphibians made such astounding dads?

Check out more pictures of these astounding amphibian fathers below: 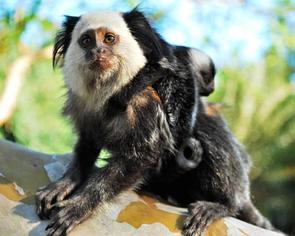 Image via Paulo B. Chaves/Flickr
Pygmy marmoset dads are among the best fathers in the animal kingdom since they take their roles as fathers very seriously. Male marmosets start caring for their young from day one by grooming and licking the newborns, as the mother recuperates from her ordeal.

Jeff French, primatologist at the University of Nebraska Zoo, tells National Geographic that one reason the marmoset daddy is so involved is because of the tremendous physical strain put on the expectant mother. “It's like a 120-pound (55-kilogram) woman giving birth to a 30-pound (14-kilogram) baby,” explains French.

9. Flamingo - A Father All About the Equality of Sexes 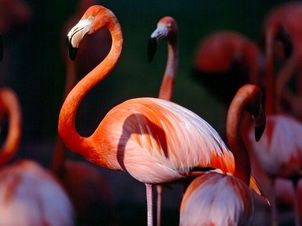 Image via Michael Nichols/National Geographic
The male flamingo serves as outstanding example of an equal parent in the animal kingdom. Both the male and female take turns incubating the egg by sitting on top of the nest mound. During incubation, the parent birds carefully lift and turn the egg with their bill. Once the chick begins to hatch, the flamingo parents appear anxious as they stand around, look at the egg, and vocalize.

Newly-hatched chicks have grey feathers and are not very agile. Movement is limited to pushing its wings or lifting its head. Chicks will leave their nest usually after four to seven days, when they are strong enough to stand and walk. Parents keep a close, protective watch on their chick as it explores its habitat. Flamingo moms and dads sure are attentive parents

10. Great Horned Owl - The Provide for All Daddy 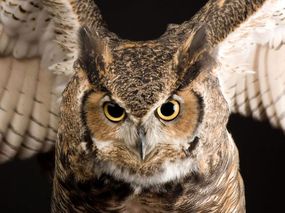 Image via Joel Sartore/National Geographic
Great horned owls are another example of dedicated fathers in the animal kingdom. Once the male owl attracts a mate, both partners go house-hunting for places such as old squirrel nests, hawk nests or hollowed-out tree stumps.

During the winter, the female lays a few eggs and the male's marathon begins. While she keeps those eggs from freezing, he brings home the bacon, or in the owl's case, rats, and mice, squirrels. So the daddy owl must feed himself and the mother, who is about 25% larger than himself. This burden multiplies once the eggs hatch and the hatchlings start crying for food. The mother stays in the nest for the first weeks of their lives because they cannot maintain their own body temperature. After about a month, however, she starts to help hunt. Daddy owl continues to provide food and protection to all of his young owlets.